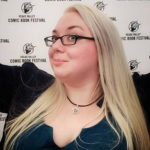 Dr. Jessica Hebert is a placentologist and nerdy musician with the PDX Broadsides, a Portland, Oregon-based pop-folk trio. Their recent, debut East Coast tour featured songs about Nathan Fillion, Settlers of Catan, and mental health. Jessica is now back home, where she continues her work studying the role of the placenta (the human body’s only temporary organ!) on gestational diabetes.

In this podcast interview, Jessica and I chat about the PDX Broadsides’ piratical origin, their creative songwriting process, why so many nerd musicians sing about Rosalind Franklin, and how to request vacation time from your day job to sing in a nerd band. We also dive into myths about the placenta, the value of communication in the sciences, and scientific role models.

Full disclosure: I backed the Kickstarter for the PDX Broadsides’ latest album, Relatable Content, and have hosted Christian Lipski in my graduate class as a guest speaker.