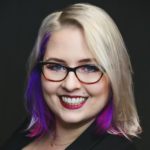 Katie Kaitchuck is the executive director of GaymerX, an LGBT-focused gaming convention. In the past year, the organization became a non-profit, separated from the for-profit MidBoss Games, sent diverse indie developers to GDC, and began planning next year’s GaymerX conventions. Amid all this and after only two months as GaymerX’s program director, Kaitchuck became executive director in April 2018 and is now charting the future of the organization.

In this episode, Kaitchuck and I discuss the need for a safe space like GaymerX, and whether other gaming conventions have changed; when and where future GaymerX events will occur, and whether they’ll rely on crowdfunding; the benefits of becoming a non-profit; how GaymerX’s relationship with MidBoss has evolved; her previous games industry experience working for Ubisoft and Feminist Frequency; bisexuality and bi-erasure; and the many games starring queer characters (Life Is Strange, Gone Home, Mass Effect, and more!) that GaymerX is promoting for Pride Month.