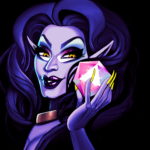 Queens of Adventure is a comedy-adventure podcast in which four drag queens slay their way through pencil-and-paper role-playing games. Adapted from the live stage show Dungeons & Drag Queens, Queens of Adventure has as its dungeon master Matt Baume, host of the podcast Sewers of Paris, director of documentary Playing with Pride, and returning guest of Polygamer.

On this episode, Matt provides an introductory lesson to drag and how it’s similar to D&D; how he’ll adapt an over-the-top live show of one-off adventures to an audio-only ongoing campaign; how designer James Morris is creating a role-playing campaign for drag queens that’s different from off-the-shelf modules, including using the language of polari; and the exciting stretch goals for the podcast’s Kickstarter campaign.

Full disclosure: I back Matt Baume on Patreon and Queens of Adventure on Kickstarter.