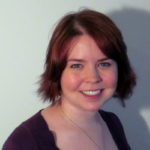 Katie Hallahan is the chief communications officer, co-founder, game designer, and public relations director for Phoenix Online Studios, a developer and publisher of point-and-click adventure games. The studio began in 2002 when Katie and her fellow directors set out to create an unofficial King’s Quest fan game, The Silver Lining, the fifth and final episode of which is releasing this year. Phoenix Online Studios has since partnered with legendary game designer Jane Jensen to release Cognition: An Erica Reed Thriller and Gabriel Knight: Sins of the Father 20th Anniversary Edition. In her spare time, Katie writes for 411mania.com, covering The Walking Dead.

In this interview, Katie and I discuss the many legal trials and tribulations involved in publishing The Silver Lining, and how the release of The Odd Gentlemen’s new episodic King’s Quest game affected the studio; how Phoenix Online Studios came to work with Jane Jensen; the transition from Torque to Unity game engines, and what this means for multi-platform releases; the studio’s experiments with publishing games by other developers, such as Quest for Infamy by Infamous Quests; and how to get into the games industry as a narrative designer. Finally, Katie and I talk about The Walking Dead universe of comics, games, and shows, whether we’re reaching peak zombie, and what the endgame is for a show based on a comic with no end.