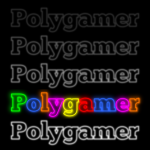 Three years ago, I hosted the PAX East panel “Sex, Sexy & Sexism: Fixing Gender Inequality in Gaming“. The event was standing room only, which helped me realize that the conversation couldn’t begin and end there: I had to continue the discussion in a way that featured more voices and reached a larger audience. Thus was born the Polygamer podcast.

A month later, GamerGate occurred, underscoring the need to highlight diverse voices in gaming. And two years later, the United States elected the opposite of a feminist, making this podcast more important than ever.

Polygamer has since addressed such critical issues as toxic masculinity, games for social justice, mental health, and theology. But we’ve had a lot of fun, too, by featuring talented artists and creators whose love for gaming culture know no bounds, with whom I’ve discussed cosplay, voice acting, music, interactive fiction, fighting games, and Pokémon GO. I look forward to continuing to host this show and broadening the range of topics and voices it features.

While I had an embarrassment of topics to choose from when the show launched, I now find myself wanting to carefully select unique subjects and angles that the show has not addressed, which requires more research and networking beyond the previous guests. Also, each episode of Polygamer already takes a good deal of preparation: identifying guests, researching their past work and appearances, hosting the show, then editing it is more time-consuming than a gaming podcasts two regular co-hosts getting together to talk about what they played that week.

For these reasons, starting in July 2017 on the show’s three-year anniversary, Polygamer is switching from a twice-monthly publication schedule to monthly. While such an infrequent schedule is unusual and not competitive with the many weekly gaming shows that exist, I feel it’s the right choice for Polygamer. Such a substantial show takes time to both produce and consume, and its content is evergreen, proving as relevant the day it airs as it will be a year later. I’m confident that this transition will allow me to maintain the show’s quality and relevance.

As always, all past and future episodes of the show will continue to be available both on this website and in the Internet Archive.

Thank you for listening! Stay tuned as we continue to explore the boundaries of gaming.