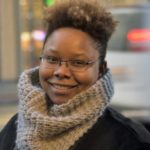 Kishonna Gray is a visiting scholar at MIT’s Comparative Media Studies/Writing department, where she teaches Women & Gender Studies. She comes from Eastern Kentucky University, where she founded the Critical Gaming Lab; and from Arizona State University, where earned her Ph.D. in justice studies. She is the author of Race, Gender, and Deviance in Xbox Live, in which she examines deviant behavior in online gaming.

In this episode of Polygamer, I ask Kishonna about the correlation between justice studies and media studies; how her relationship with gaming evolved from being a gamer to an academic; why games became less diverse after the 1990s; whether entertainment media shows a rise in violence toward women, and the ways in which that is paralleled in online harassment and offline violence; her goal in founding EKU’s Critical Gaming Lab; what her time at MIT has allowed her to do that she couldn’t do at EKU; and the hope to be found in indie game development.