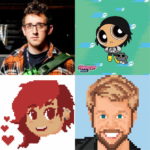 GaymerX, the world’s only annual video game and geek culture convention for the LGBT+ community and its allies, has arrived on the East Coast! After four successful events in California and one in Australia, the first GaymerX East was held in New York City the weekend of November 11–13.

I attended GXE, as did many other Polygamer alumni. I invited three of them to participate in a panel about their work in gaming diversity, how they stay inspired and motivated, and how they define success. Joining me in this discussion were GaymerX founder Matt Conn (episodes #01 & #32); ethnographer and voice actor Khadeja Merenkov (episodes #05 & #10; and undergraduate community organizer Francesca Carletto-Leon (#33).

Stream the audio recording of this panel below or from iTunes, Stitcher, Google Play Music, Mixcloud, Overcast, acast, Pocket Casts, Castbox, TuneIn, RadioPublic, or the Internet Archive, and stay after the credits for a bonus discussion about the viability of the upcoming Nintendo Switch console.