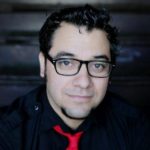 Mike Robles, social media manager for mental health non-profit Take This, is an industry veteran with many prominent studios on his résumé, including Microsoft, Wizards of the Coast, and Lone Shark Games. He helped build and support the Killer Instinct community when Rare’s fighting game debuted on the Xbox One, and he’s an frequent attendee at the Evolution World Championship Series, occurring this weekend in Las Vegas. Mike is also involved in the Magic: The Gathering community, helping onboard new players through the Lady Planeswalker Society, an organization founded by his partner, Tifa Robles. Mike and Tifa recently earned their first game design credits when they contributed to Widow’s Walk, the first expansion for Betrayal at House on the Hill, the popular board game from Avalon Hill. But his crowning achievement may’ve been interviewing Stan Lee on-stage at Emerald City Comic-Con 2015.

In this episode of Polygamer, Mike and I discuss how new gamers can be introduced to complex fighting games like Killer Instinct, and whether tournaments are best held online or off; why Street Fighter V launched with such poor offline support; how Mike and Tifa came to join Anita Sarkeesian and Zoé Quinn on the roster of contributors to Widow’s Walk, and why Dead of Winter is the board game currently occupying his time; how Mike’s role as “Mr. Tifa” has evolved at the Lady Planeswalker Society while he and Tifa prepare to welcome their first child; how Mike will juggle being a stay-at-home dad while working for Take This; how to connect a gamer friend with the mental health resources they may need; and what Stan Lee is really like off-stage.