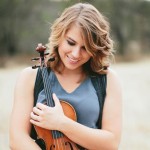 Taylor Davis is a renowned violinist whose video game, movie, and anime covers have earned her a loyal following. On YouTube, where she has over a million subscribers, her music videos employ stunning backdrops and intricate costumes inspired by the pop culture from which she draws her many tunes. Taylor has released six albums, including a Christmas album and, most recently, a self-titled album of original music. Her music can also be heard in rock band Critical Hit’s first album, as well as in the soundtrack to The Witcher 3: Wild Hunt — Hearts Of Stone.

In this interview, Taylor and Ken discuss her recent debut tour of the United States and her upcoming European tour; how Patreon and Twitter give her direct access to her fans, and vice versa; whether making music for a living makes it feel more like work than play;how licensing rights influences what music videos are shot next; and her cautious optimism for the upcoming Final Fantasy VII remake.

(Thanks to @BlondieChick80 for her help brainstorming questions for this interview!)

« Polygamer #33: Francesca Carletto-Leon on Diversity in Gaming at WPI
Polygamer #35: Susan Arendt of Take This »