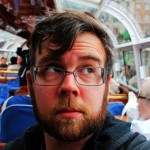 Benjamin Williams is the co-founder of the PAX Diversity Lounge, a safe space at Penny Arcade Expo conventions that offers marginalized groups free tables and booths with which to represent their products and services. First launched at PAX East 2014, the room has been host to many groups and attendees and has been well-received by many, though concerns over segregation still exist. Benjamin comes to the Diversity Lounge having previously co-founded the Queer Geek community group and having spoken on PAX panels on creating diversity playgroups.

In this interview, Benjamin and I talk about what prompted the founding of the Diversity Lounge; how to tell if the Lounge is doing its job, and if it will ever not be needed; how the room has evolved in its short life; the problematic nature of PAX; what constitutes a diversity playgroup; and whether “white knighting” has an undeservedly bad reputation.

Download the audio edition of this interview below or from iTunes, Stitcher, Google Podcasts, Spotify, Amazon Music, Overcast, Pandora, Pocket Casts, iHeartRadio, TuneIn, RadioPublic, or the Internet Archive. Click past the jump for links to resources mentioned in this episode.

« Stage of Development: The human side of gaming
A year of GamerGate and online harassment »

One thought on “Polygamer #28: Benjamin Williams of the PAX Diversity Lounge”