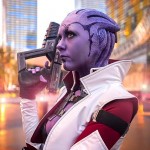 Emma Bell is an accomplished and talented cosplayer, appearing at anime and video game conventions as characters from Mass Effect, Dragon Ball Z, Dragon Age, and Agent Carter. Her upcoming appearances include West Coast conventions Anime Revolution and PAX Prime, where her husband and fellow cosplayer Koko will be her helper. The studio arts skills Emma learns from cosplaying feed back into her Etsy shop, where she sells costume pieces, patches, and other accessories.

I met Emma at PAX East 2014, where she graciously posed for some photos in her Aria T’Loak costume. Still impressed by her art and expertise more than a year later, I called Emma to chat about how to get into cosplay; budgeting the time and money for buying or crafting costume pieces; choosing which conventions to cosplay at; whether or not to be limited in cosplay options by one’s gender; how to interact with cosplayers; and why cosplay is not consent.

Download the audio edition of this interview below or from iTunes, Stitcher, Google Podcasts, Mixcloud, Spoke, Overcast, acast, Pocket Casts, Castbox, TuneIn, RadioPublic, or the Internet Archive. Click past the jump for links to resources mentioned in this episode.

« Polygamer #26: Christian Donlan of Eurogamer on multiple sclerosis
Stage of Development: The human side of gaming »