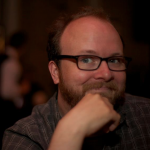 Christian Donlan is a prolific writer, having contributed to Edge magazine, co-founded gaming site Hookshot, and co-created the animated children’s show Everybody Loves a Moose. After four years of freelancing for Eurogamer.net, he joined the staff as associate editor. His portfolio for that site exceeds 800 articles that demonstrate his passion for gaming as an art form.

In early 2014, Christian woke up to tingling in his fingers and toes. Several visits to the neurologist produced a diagnosis: multiple sclerosis, a degenerative neurological disorder that he shares with Polygamer host Ken Gagne’s mother. That November, Donlan penned an article for Eurogamer about how video games taught him the life skills he needed to cope with his diagnosis.

In this interview, Christian discusses the differences between the American and European gaming scene and his trajectory as a writer before sharing his experiences with multiple sclerosis: the challenges of being “out” about his disease, the support he’s received from his community, how MS put his life into perspective and made it easier to handle catastrophes, and why games like Spelunky and XCOM were a more valuable metaphor and escape than Uncharted.