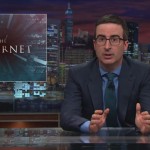 Weekly news show Last Week Tonight with John Oliver takes a satirical approach to news, similar to The Daily Show or The Colbert Report. But that doesn’t mean the issues it addresses aren’t serious. On the June 21, 2015, episode, Oliver tackled the issue of online harassment, opening with a clip from the documentary GTFO and featuring interviews with Anita Sarkeesian and Brianna Wu:

I’m sometimes asked why I focus on sexism in gaming and not in other fields, like politics or the film industry. It’s not because gaming is the only arena in which sexism is rampant — it’s not — but it’s where it’s most flagrant. As Oliver said, "This does not just affect women in gaming; it can potentially affect any woman who makes the mistake of having a thought in her mind and then vocalizing it online." Harassment is not free speech when it scares other people into sacrificing their own right to speak their minds. We need to all feel safe enough to stand up for ourselves without fearing threats to our lives, bodies, and loved ones.