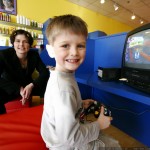 When I was first solicited to moderate the parenting panel that is this week’s episode of Polygamer, I was surprised. My contribution to the discussion of how to be a parent in the gaming industry is don’t, as I’m an advocate for acceptance of the childfree lifestyle. But the selfish purpose of Polygamer is to expose myself to lifestyles other than my own, and moderating a panel on parenting was the perfect opportunity to do so.

As the date of the panel grew closer, I got more excited for the discussions we were about to have — so much so that I already wanted to continue the conversation at PAX East. I reached out to my friend Nicole Tompkins-Hughes, whom I’d previously seen moderate the BostonFIG 2014 panel "The Next Generation: Making Games for Kids and Families" and for whose freelance article "The Last Tinker: When Good Games Make Bad Choices" I was an early reader. I knew she’d submitted some panels to PAX East — were any of them about parenting?

They weren’t! But Nicole was as excited about this topic as I was. With just 24 hours before the submission deadline, we sprang into action. I recruited Nicole to moderate the proposed panel, drafted Amanda Warner from the Women in Games panel, then took Nicole’s direction in recruiting four other panelists. We submitted our proposal, waited three weeks — and got accepted!

Saturday, March 7th at 10:30am in Bumblebee Theatre

No role-playing game can present a greater challenge than the real-life role of parent. Does gaming end with parenthood, or is it just the next level? Hear from industry professionals on how they manage their time, handle the joys and journeys of gaming with their families, and maintain relationships of all kinds both online and off.

This is the first time I’ve submitted a PAX panel that I wouldn’t be on. Since I’m not one of the panelists, the PAX East schedule coordinators saw no conflict in putting me on another panel that is happening at the same time. I regret that I will not be able to be in the audience for this great panel, especially since it includes three friends. But I’m glad to see PAX East give this topic the attention it deserves — I’m sure it’ll be a great session!