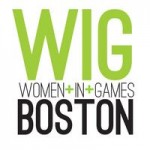 No role-playing game can present a greater challenge than the real-life role of parent — especially when you’re a game developer. How does one juggle these dual roles and responsibilities? Are telecommuting and crunch time harder when you have kids? Does being a parent affect the kinds of games you’ll produce or play?

At the January 2015 monthly meetup of Women in Games Boston, I moderated a panel that addressed these topics and more. The five panelists were Boston-based game developers and parents:

This episode of Polygamer is a recording of that panel. Thanks to Wade Clarke for his assistance in cleaning up the audio. Download the episode below or from iTunes, Stitcher, Google Podcasts, Mixcloud, Spoke, Overcast, acast, Pocket Casts, Castbox, TuneIn, RadioPublic, or the Internet Archive. A video of the panel is also available, courtesy Oleg Brodskiy:

A similar panel will be presented at PAX East, with Amanda Warner in a recurring role.